Deem Bristow
Dogs is the captain of the S.S. Diana, a KIMRA supply ship, and the second main character of the game. He's a gruff, weathered, and snarky man who usually back-talks or criticizes the other main character, Eliot G. Ballade, throughout the game.

It is later revealed that he is the father of security member Janine King.

Dogs has eight weapons he can use throughout the game. He starts with a Super Bow Manta-Ray Bowgun, and can later use a Super Bazooka, a Rail Gun, and a Gatling Gun.

In addition to ranged weapons, Dogs can equip a Jumbo Club, as well as different T-Shirts that allow him to perform other melee attacks, such as a Karate T-Shirt, a Sumo T-Shirt, and a Wrestling T-Shirt.

Unlike Eliot, he can't equip both a short-ranged and long-ranged weapon.

Dogs worked on Dinosaur Island as the captain of a supply ship and was well-known throughout the island. Janine comments about his fame and infamy, referring to a debt he has to Rat's Bar.

He was married to Jean King, Janine's mother. Jean was a shooting instructor for ESER, explaining why Janine's talented with a sniper rifle. He divorced her in 1998, although Dogs can't recall why other than that she was hard-headed. 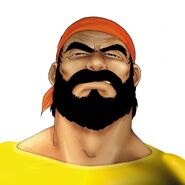 Art of Dogs from the game manual

Pictures of Dogs in Janine's apartment 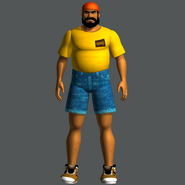 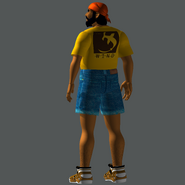 Back of Dogs' 3D model
Add a photo to this gallery
Retrieved from "https://blue-stinger.fandom.com/wiki/Dogs_Bower?oldid=4287"
Community content is available under CC-BY-SA unless otherwise noted.